The story of a mad captain's quest for revenge on the amorphous spacial energy cloud that temporarily took his leg.

" - The writing is superb… the most creative use of lighting I’ve ever seen… an ingenious bit of comedy theater." - Edinburgh Festivals Magazine

Playing at The Caveat in New York, Saturday June 9th at 6:30PM.

An hilarious homage to classic sci-fi and bombastic literature, Moby Alpha tells the story of a mad captain's quest for revenge on the amorphous spacial energy cloud that temporarily took his leg. More simply, Moby Alpha is Moby–Dick in space, but funny.

The show is performed in an entirely dark theater with the only light emanating from the duo’s custom-built million color LED space helmets, creating a unique, otherworldly aesthetic.

Named a "Pick of the Fringe" at the 2015 Edinburgh Fringe Festival.

Finalist for Best Comedy at The 2014 Hollywood Fringe


"Charles may have landed a triple-crossover hit...pleasing Melville nerds, sci-fi nerds, and comedy nerds."
The Stranger

" - A clever satire that manages to prank sci-fi and classical culture in the same trip."
Edmonton Sun

" - Two energetic and well-prepared actors to set their phasers to 'funny' and fire away with brisk wordplay and bright physical comedy."
Winnipeg Free Press

"The staging is so clever it nearly overheated my circuits. Simple but practically perfect."
The Scotsman

"Nerds will rejoice in [the] impressive attention to detail."
Edmonton Journal

"Skewer[ing] everything from the ridiculousness of their characters’ motivations… to some of sci-fi pulp’s worst cliches, Armstrong and Stockman adroitly move from tight setpiece to tight setpiece with grace and wit."
The Seattle Star 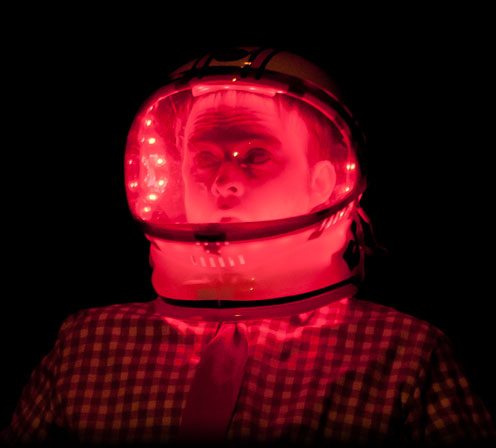